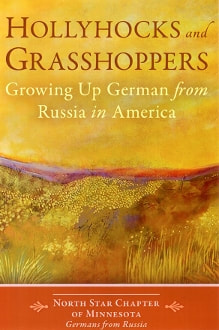 Add to Cart
Christmas services in a country church.....going to town on a Saturday night..........the utter delicious ness of homemade ethnic food. These are only some of the memories shred by the members of the North Star Chapter of Germans from Russia in this beautiful anthology. The authors' experiences span decades and cross state boundaries, evoking feelings that all descendants of immigrants share. The voices of the past shine through in these pages, good times and hard times, family and friends, new things colliding with old ways. The warmth and the steadfastness of these pioneers remains the same, viewed through the eyes of the people who experience it.
Note that prices are for shipment within the USA.
Outside the USA email: caroljust@hotmail.com
​

As one who left South Dakota at age ten when his family moved to California, I’ve survived on memories of Dakota prairies forged in my ten years on that farm near Emery, and through annual family visits when a child and teenager to visit grandparents in Emery and Menno, as well as relatives in Washburn, ND. Our visits were filled with encounters with the myriad of Fauths and Kosts and their in-laws near Emery and Parkston, and when my grandparents aged, we spent time in “care centers” in Menno, Marion, and Freeman, and at memorial services at churches and graveyards in Emery,  Olivet, and Menno.

My academic odyssey took me to graduate schools in Indiana, California, and England and I more or less envied those with more pronounced ethnic identities: Jewish, Chicano, or Italian—where were the movies and TV shows about our families’ pathos? I sometimes wondered. Earning a PhD in English, I specialized in the literature, history and culture of the British Isles, and one summer while on vacation from my professoriate in St. Paul, MN, I was brought up short by my maternal grandfather, a “German” with family roots in Hinter Pomerania, and a German grandmother who had been born in Adelaide, Australia. “You’re not German, you’re Rooshian!” was my grandfather’s response to my self-identification as a German—after all, my paternal grandparents conversed with my father in German, and he with his cousins and aunts and uncles in the same language. However, it was a spoken language quite dissimilar to what I had learned in my Graduate School reading courses in German.

Discovering genealogy, DNA, Ancestry.com, the GRHS and AHSGR, and then the GCRA, I began to piece together my family’s history and eventually began to work with Margaret Freeman in Redondo Beach on the GCRA Newsletter, which I now edit. And I began to learn much about my ancestors’ odysseys and the impact the Seven Years War, the Manifestos by Czarina Catharine, and the French Revolution had upon my paternal (Fauth and Kost) lines.

With all that in mind, it’s a pleasant experience to pick up the North Star Chapter’s anthologies: Hollyhocks and Grasshoppers, and Watermelons and Thistles, both subtitled Growing Up German from Russia in America. They are well-written and offer a myriad of insights into what it was like growing-up German, but Rooshian!

These two volumes present multiple insights into our folk, from the nostalgic views of the prairie, seemingly accessible only to those of us who have heard the breeze blow through the oat field or hear the meadowlark’s song—“Prairie Memories”. With Carol Just and Merv Rennich, I have searched for family ties before Russia, in Russia, in Germany, and now the USA, wading through Stumpp and learning from Height and Geisinger. And with David Delzer, I have lived through what I thought were massive blizzards while on the farm in South Dakota, waiting to be picked up at my one-room Taylor # 7 school by my father on his Massy Harris tractor, the only vehicle that could traverse the drifted roads.

As one who matriculated to a massive city school in the fifth grade (three classes of 5th graders at El Marino School in Culver City, California), the memories of my years at Taylor # 7 were rekindled by Ron Scherbenski’s “Bauer #2 Launched a Lifetime of Learning,” in Watermelons and Thistles. Taylor # 7, like Bauer # 2 had no indoor plumbing, although the girls got to use the chemical facilities, while the boys had to trek to the outhouse. “Red rover, hide and seek, kick the can, and softball” were common to Taylor and Bauer schools, as were the two swings, although we did not have a see-saw. Seven students at Taylor # 7, and six students at Bauer # 2 afforded us much individual attention, and I was pushed because my teacher lumped me into lessons with Beverly Decker and Joyce Heiman, one grade ahead of me. Like Ron, when in “town school” I found myself well prepared for any academic quest—indeed, both Ron, myself, and I’m sure, the multitudes of others so taught—as noted in the accounts by Henrietta Weigel (“A Farm School Education”), and Lil Ward (“My One-Room Schoolhouse”). We were beneficiaries of the individual attention that one-room education provided.

Bernelda Kallenberger Becker’s “Radio: Bringing the World to the Prairie” with its reminder of the “J-E-L-L-O” and the “Call for Philip Morris” advertising ditties reminds me of our Saturday evening trips from the farm to Menno, twenty miles south to take piano lessons from Mrs. Ulmer, visit the Farmer’s Union and the K&K Market for supplies,  and to Espedal’s Bakery before ice-cream at Grandma’s house. On the journey to Menno, we would listen to Gunsmoke on the car radio. No radio for the return trip, though; sleep was needed to prepare for Sunday School and church in the morning. And with Bernelda, I too share memories of The Old Time Revival Hour and remember my mother listening to WNAX from Yankton, especially Our Neighbor Lady.

Another piece arousing nostalgia is “Dad’s Auction” by Bernelda Kallenberger Becker. I’m sure the sentiments aroused are common to many reading GCRA Newsletter, having seen relatives “sell out.” Ruben Kallenberger’s Auction Notice reproduced on p. 111 of Watermelons and Thistles reminded me of dad’s sale notice; it’s framed in his office in my mother’s house, a reminder of the material culture of another era and another area.

Similar stories, Merv Rennich’s “Picking Rock” and James Gessle’s “Kuchen: What’s In It for Me” in the earlier volume, Hollyhocks and Grasshoppezrs” tickle the strings of memories of those of us who grew up on the prairie, and offer insights into our ethnic group for readers to see, to learn, and to cherish.

As a long-time Professor of Literature, I find these stories well-written and replete with verisimilitude, a truthfulness-to-life that vicariously reminds me of the taste of my grandmother’s prune and apricot Kuchens; reading these stories I again can hear the meadowlarks singing, or the blizzard winds blowing. And, as one who has earned a degree in an ethnic studies field (Chicano Studies), I view these two collections as pieces of material culture, ethnic artifacts that illustrate the customs and perspectives of people who have gone under the radar of ethnic awareness. Thanks to these volumes, our folk and our ways will not be forgotten.

The North Star Chapter has provided for those of us alive today insights into a world that is dying out, and for those of future generations who pick up these anthologies, they will be able to get a glimpse of life on the prairies during the middle third of the twentieth century.